Presentation
Identification
Names
Uses
The southernmost of our Trilliums, but the most spectacular!The White trillium is a spring ephemeral of our rich woods.The flower usually white with three petals may have variations, double flowers, 4-30 petals, pink flowers, petals misshapen, etc...These variations are not varieties of the plant as such, but rather deformations due to a bacteria, these deformed plants are usually sterile.But there is a pink flower form (f. roseum) which is very rare, most pinkish flowers found in Quebec are transitory, once the flower fully developed it will become white.Unlike the Red trillium, White trillium has no odor.A popular food among deers.The White trilliumr is declared species vulnerable to harvest in Quebec, do not pick.The occurrences of this species are not to be reported.I would like to thank for her informations, Mrs. Fanny Beaudoin from Organisme des bassins versants de la Zone Bayonne, thanks to her instructions I found and photographed a colony of White Trilliums in Lanaudière. 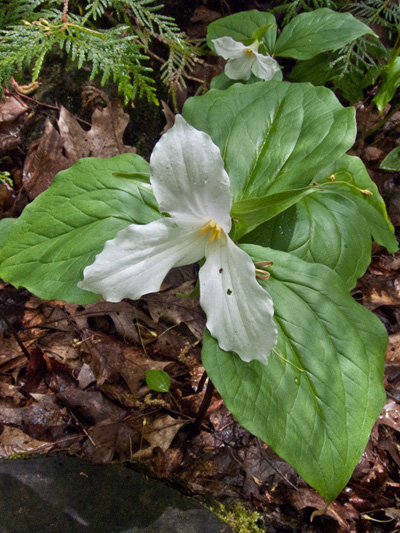